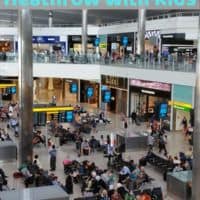 As soon as we landed at Heathrow Airport with a long layover before our flight to Frankfurt, I found an information desk and asked where we could find an indoor play area for 3YO Tiny Traveler, who was feeling pretty cooped up after our day-long flight from New York via Boston.

The staffer told me there weren’t any in this busy London airport. This isn’t true and it demonstrates just how hard it can be to get good information about family amenities at airports.

Read More: 20 Things To Do in LondonWith Kids
• 5 London Palaces To Visit With Kids

On the way to our gate in Terminal 3 we found a 20-by-20 play area with a small slide/climbing structure, a giant Connect 4 game, and small table with a staffer to help with quick art projects.

We delayed heading to the gate as long as we could to let Tiny Traveler play. But boy do we wish we’d found it sooner. Prior to boarding a six-hour flight I would have happily foregone window-shopping at the Duty Free to give her more run-around time (especially since my husband refused to indulge my interest in royal wedding commemorative tea tins).

Here’s what I’ve learned about getting around Heathrow with kids.

Tips For Navigating Heathrow With A Preschooler

The good thing about London aiports in general is that the U.K.’s equivalent of TSA security staff are very well trained, polite and seem to believe it’s their mission to solve problems and get you on your way.

My single-serving tetra-brick of milk violated the liquids restriction, but it was clearly for the preschooler we had with us. So the security person said out loud, “let me think what we can do.”

I offered to open it up and drink some of it and that satisfied him. I poured it into a sippy cup once it was open and Tiny Traveler drank it soon anyway.

Look for or ask for the family security lane, which we’ve also used at Gatwick. They’re usually much shorter and they let you do things like keep shoes and jackets on. They’re also adept at dealing with strollers and carriers.

The downside of this is that each time you change terminals at Heathrow you have to pass through security as well as hop on a shuttle bus or train. I’ve never done it in less than 45 minutes, partly because Heathrow is big and the shuttle ride can be a good 20 minutes.

I highly recommend sticking to the lounges, hotels and entertainment in or near your departure terminal, even if there are more enticing options further afield. I also recommend a stroller for under-5s and a carrier for babies as transferring can involve a fair amount of walking.

There are a few play areas in the airport, primarily suited to the under-6 set. The catch is that they tend to be toward the gates and away from the central shopping/waiting areas. You have to hunt them down.

Look for signs about them as you come through security. If you are in Terminals 1, 3 or 5 keep asking airport personnel until someone can point you to one.

• Terminal 3 is where most US-bound flights leave from. It has the play area I discovered, toward the gates just beyond the Caviar House and Gucci.

In the central waiting area, near Boots, there’s a small play station with 2 computer games and a couple of stationary toys. It’s not great but it will keep a toddler or preschooler occupied for 20 minutes or so.

T3 also has the No.1 Traveler Lounge that offers a colorful family room with toys. It has games like foosball for older kids, too.

There are bedrooms with showers if you have a long enough layover to catch a nap or you really need to make everyone just a little less sticky. Figure on $60 for one adult and one child—not cheap a good deal for layovers that aren’t quite long to justify a $200 hotel stay .

• Terminal 5 is where most intra-Europe flights leave from. It has several play spaces, including some for kids up to age 8.

It also has an official Harry Potter shop, where kids too old for the play areas gravitate to ogle the wands and wizard-world candy.

T5 is the most newly renovated terminal. It’s spiffier, brighter and has better shopping and restaurants than the others. Giraffe is a local chain that London parents love. It’s good bet for reasonably healthy, reasonably quick (and reasonably good) sit-down eating.

• Terminal 1 has a play area, too, for kids six and under. But I couldn’t find out much about it.

Staying Up To Date

Heathrow has undergone a lot of construction and updating so things change. Before heading out, download the Heathrow app or at least check the airport’s website for an updated rundown of family amenities.

Check with your airline and credit card for potential lounge offerings. And download your airline’s app so you’ll know instantly if your gate or other flight information changes.

Black cabs are the priciest option for getting to and from Heathrow. Depending on the time of day and traffic, travel times and thus total fees can vary widely. If you have a lot of luggage or you’re landing in the early morning with jetlagged kids who will sleep through any delays, a taxi can be the easiest option. Plan on anywhere from £60-£90.

A popular choice these days is the Heathrow Express train. It’s a 15-minute ride from the airport to Paddington. If you’re hotel isn’t close to Paddington you can catch a tube or a taxi from there. It’s £22 one way off-peak or £37 return and kids under 16 ride for free. You can buy tickets at airport kiosks but you can’t use your oyster card. It’s incredibly easy.

Ride-sharing services have come to London, but the last time we were there I wasn’t sure we could count on having a mobile connection as soon as we landed to order a car and find it. There are also myriad mini-cab companies but prices and quality vary considerably.

The tube is the cheapest option. It’s a long ride into central London but without traffic the travel time is at least likely to be dependable. Depending on when your flight is arriving or leaving it might be worth the saving if you have older kids and carry-ons.

We had an akward layover during that flight to Frankfurt, neeeding a place to rest our head from about midnight to 5:00 AM. It didn’t seeem long enough to enjoy the amenities at an airport hotel or to justify a $200 tab. Luckily, I stumbled onto YotelAir, a pod hotel in Terminal 4 that offers good overnight rates on booking sites. But you can also pay to book it by the hour on its website.

The rooms are a double bed, maybe two singles, a flatscreen TV and a bathroom. If you have one or two small kids, it’s an ideal place to get some quiet, catch a nap, change diapers and brush your teeth or shower when you’re stuck for a few hours. If you have more than two kids or a large teenage you’d need two rooms and than it probably ceases to more economical than a real hotel room.

Heathrow doesn’t list the Yotel in its airport guide; I can’t imagine why. But there is also a Hilton in Terminal 4 and a Sofitel in Terminal 5.

Note that all the hotels are on the landside, not the airside, and dining options are very limited. The two larger hotels each have a few restaurants. But depending on your timing, you might consider stopping for a meal on the airside of the terminals, where you’ll have some better choices, before passing through immigration for your hotel.

Don’t forget to leave time for transit and security check before getting to your gate for your next flight.