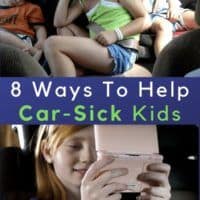 For our first car trip with Tiny Traveler, we packed the car up bright and early, then transferred the 6-month-old baby from her crib to her car seat still in her PJs, more asleep than awake. We handed her her usual wake-up bottle of milk and set off.

Everything was great for 20 minutes. Then she got car sick on the New Jersey Turnpike and was trapped in her car seat, bewildered and soaking wet until we could pull over to a rest stop ten miles later.

It seems most small kids get car sick at least once in a while, and if it happens regularly it can put parents on tenterhooks for even the shortest road trip.

Here are some things we’ve learned to do, or have heard of from friends to make car trips with car-sickness prone kids smoother and less messy.

Some of these tricks will help withother types of motion sickness, too, if kids become nautious on boats or planes or any other moving vehicle.

You Might also want to read:
10 critical road trip safety tips for families
25 tips for safe & healthy family vacations
How to feed picky eaters on vacation

Beware when your child starts to complain they’re too warm; it’s a short distance from being warm to being sick.

Tiny Traveler likes to take off her coat in the car. This is OK with me because car seat straps fit better without bulky coats. Also, if she gets sick anyway, at least I don’t have to wash her coat.

Even during the winter we keep the rear windows cracked when we can and we’re generous with the air conditioning in summer.

Some parents recommend keeping a thermos of ice chips in the car and letting your child chew on them every once in a while.  They’re cooling and the chewing motion helps with car-sickness, too.

When Tiny Traveler was younger we found that she became car sick if she was too hungry or too full.

Ideally, we’d try to give her something to eat about a 30 minutes before getting in the car so she wasn’t hungry and had had time to digest a little.

I found, and other parents say, that dairy seems more volatile than other foods. Avoid a large glass of milk or bottle of formula right before driving or while you are in the car — especially if you know you’ll be in heavy traffic or on curved roads.

Little snacks along the way help. If you can, get your child to eat a peppermint like Altoids, which has real peppermint oil, or ginger candy, which can sometimes can help.

Three Lollies’ Lollipops and candy drops might be worth a try, too. They come in a half dozen flavors, some of which your kids might prefer to the ginger or mint. Chewing gum is known to help if your child is old enough for it.

Avoid stop-and-go traffic if possible. That lurching motion is awful for people who get car sick (it even makes me queasy from time to time).

If you do get stuck in traffic, to go easy on the gas and breaks to avoid lurching and to creep along a bit more smoothly.

Use Waze, Google Maps or some similar app on your Smart Phone to see where traffic is slow and find alternative routes.

Trying to focus on a book or screen that shakes with the car’s motion make motion sickness worse. So books, coloring, dvds, video games and tablets are all off the table, unfortunately.

Try music your child will sing along to, books-on-CD and games like I Spy to keep him entertained.

For babies in rear-facing seats, the car-seat lady recommends a car seat seat the raises them higher, if possible, so they can look out the rear window into the distance rather than focusing on the seat back right in front of them. Remove the headrest if it will help their view.

Once they are front-facing, some parents suggest putting the car-sick-prone child in the middle of the back seat rather than behind one of the front seats. This allows them to look out the front window into the distance, which they say can help.

I advocate keeping kids in rear-facing seats until they hit the height and weight limits for them. But if motion sickness is a real problem, turning them around a bit sooner might be a worth-it trade-off in situations where you know it’s most likely to happen.

Dr. Sears says that motion sickness seems to get worse the further back a passenger sits in a vehicle. Let car sick tweens and teens ride in the front passenger side when they’re tall enough.

And don’t put the sickness-prone kid in the third row of a minivan or truck of you have one.

Make frequent stops to get some fresh air and a break from the driving motion.

Closing your eyes helps to relieve motion sickness. Asking a child to keep their eyes closed can be hard—unless you can find a way to turnit into a game.

Driving during naptime when your little one is likely to drift off can stave off both nausea and boredom.

The worst days of Tiny Traveler’s motion sickness were behind us by about age 5—unless she was congested. If she had a cold or it was allergy season and she was all stuffed up she would get car sick all over again.

There isn’t too much we could do about that other than be careful to avoid winding roads and traffic jams and go easy on the breaks when she was sniffly.

If motion sickness persists as your child gets older, You can try a new product called the Relief Band, a high-tech solution, which I think somehow keeps your stomach from telling your brain to be nauseous.

There are also aromatherapy products that can help without kids having to take medicine.

Some parents find that medications such as Dramamine or Bonine, antihistimines like Benadryl help. These can knock kids out, which they might not like, and while they’re great for night driving or long trips, it’s not ideal for shorter trips when they don’t have enough time to sleep them off.

An alternative is to try homeopathic motion sickness pills like Boiron’s, which can help for severe car sickness.

It’s always a good idea to check with your pediatrician about age appropriateness and dosage and interactions with other medicines.

Non-medical aids like SeaBands (in the photo above) rely on acupressure to relieve motion sickness. Make sure you buy the child size.

8. Have a car-sickness kit ready.

We learned to stock the car with wipes, a disposable plastic container, a plastic bag for dirty clothes, extra towels and a bottle of water for cleaning up messes, and extra kid clothes, too.

Some parents put a ziplock back in a plastic container so they can seal the mess up easily if they can’t stop right away.

Others say that in a pinch a disposable diaper makes a good catcher’s mitt–if your child is still young enough to use them.

Many kids outgrow car sickness as they get older. At the very least they get better at managing it, and at letting you know when they need to pull over. With any luck your child will be one of those kids.

For more information, the Mayo Clinic, has tips for helping the car sick, too.