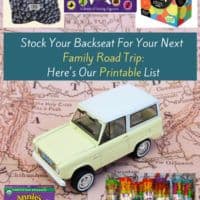 We’ve taken some pretty long road trips as family travelers. Six hours to Montreal, seven to Pittsburgh and more than nine to the Outer Banks, just to name a few.

We are those crazy parents who try to avoid handing our child an electronic screen the second the key is in the ignition, so we’ve learned a lot about what entertains kids during long spells in the car.

We’ve seen Tiny Traveler evolve from stickers and Play-Doh to Wikki Stix and 20 Questions, to coding apps and books. Here is a run down of what we’ve packed in the back seat for these long car journeys.

1. A Thing To Put Things In

I didn’t give much thought to backseat storage until we had a kid in the car. I’ve tried a few different things, and the best thing for us so far has been a basic plastic bin.

It’s easy to remove to shake out crumbs, give it a rinse and cull the odd things that accumulate. It can go on the seat or on the floor. And if you’ve more than one kid in the car, it creates space between them.

It’s handy to have something to throw trash into, too. Otherwise by the end of the trip the back floor is a sea of food wrappers, dried out markers and half-eaten cookies.

Particularly for winter road trips, but in the cool weather, too, my kid loves to have something to snuggle with or under in the car. It used to be stuffed animal. For some kid it’s that favorite super-soft hoodie.

Lately, Tween Traveler brings her favorite fleece throw into the car, especially if we’re traveling at night. She doesn’t sleep in the car very much any more, but having something to snuggle under helps.

Since kids rarely wear their coats in the car, packing something warm and snug means we don’t have to blast the heat up front.

I always stash a food bag in the car that has a mix of salty, sweet and healthy snacks.

I used to put a 6-pack of water bottles in the car before a trip, but one winter I kept forgetting to bring them into the hotel overnight. So was driving around with a 6-pack of bottled ice for most of our trips.

My hot-and-cold bottle is handy for bringing a cup of hot tea along as well as cold water.

I hadn’t really thought of diaries for a 7-year-old, but I’d seen a wide range of them at the Toy Fair this year and learned most were strong sellers.

I particularly liked Klutz’s All About Me diary, which is filled with questions to answer about oneself instead of blank space.

Klutz’s is probably more suited to tweens, but at I found similar diaries for younger set with Junie B. Jones and Fancy Nancy themes. I chose the latter and chose well (if I do so myself).

Tiny Traveler sat in the back seat for more than hour at a time, reading and scribbling away, in love with the idea of having secrets from us.

Pack colored pencils and a sharpener along with the diary. They’re good for writing, drawing and coloring. Plus, they don’t melt like crayons or dry out like markers.

Books To Read or Listen To

The challenge these days is making sure she packs enough books to last through a week-long vacation. One five-hour stretch can get her most of the way through a book she really likes.

She’s also taken to tucking a flashlight into the backseat so she can read after dark.

Friends point out that a Kindle is ideal for travel because you can bring 1 book or 10 and it weighs the same. Plus, it’s easy to download something new whenever you want to.

There are a lot of good reasons for kids to read physical books, but I appreciate the advantages of an e-reader for travel.

On a few trips I brought books to read out loud. I thought we’d take turns but I wound up doing most of the reading.

The obviously more modern way to do this is to get books on CD from the library. Or download an app like Audible, which lets you listen to books on your phone via a subscription similar to Netflix.

If you’ve never used Audible before, time your sign-up so that your free first month coincides with a road trip.

On a five-hour drive, Rich and I run out of things to do, too, so we don’t mind playing easy road-trip games like I Spy and 20 Questions.

We’ve recently added Packing for Paris, where everyone takes turns adding items to the suitcase in alphabetical order, like apples, Band-Aids, cuddly toys, etc. We vary the game with cooking and zoo themes, pretty much anything you can list.

On this trip we also tried a card game called Beat the Parents. Parents and kids take turns posing multiple-choice questions about themselves. The rest of the family has to guess what they think the reader will answer.

I’ve seen a few variations on this type of game, and I don’t think this one was the best. Too many questions had no good answer or too many. Games with open-ended questions are better.

There is a series of Table Topic card decks that are supposed to be conversation starters.

They have one for families and another called Past, Present, Future that seems the most though provoking. smaller decks specifically for road trips and travel.

The Moments Series is meant to foster familial relationships (though doing that in the car on a long drive could be fraught). There’s a family deck and a generations deck to play with grandparents, aunts and uncles.

My daughter likes toys that keep her brain and hands occupied. One of the best has been Zoob. The interlocking plastic pieces come with a booklet showing all kinds of fanciful things you can make (a dinosaur, a rocket-man, a kayaker).

Tiny Traveler was mostly interested in making sticks of various sizes, but these sticks filled a wide variety of imaginary purposes (shooting aliens, making candy, poking the parent sitting in front of her).

So even if her design ambitions were more modest than I hoped, it entertained her. We kept them in the car for four years, which tells you something.

Tiny Traveler also likes looking at road maps and trying to figure out where we are and where we’re going. In the age of cell phones and GPS these old-school navigational tools are a novelty.

When Tiny Traveler was 6 or 7YO I dug up my old iPod and put three songs on it (they were all from Frozen). We’ve since she’s received a new iPod Shuffle to which she’s added songs from BeetleJuice, School of Rock, Matilda and other favorite shows.

The good news is that Tiny Traveler can throw on headphones and listen to these songs over and over for hours. The bad news is that while she’s listening on her headphones she has a tendency to sing…loudly…and not particularly well…for hours .

You win some, you lose some.

My iPad used to contain a bunch of educational games Tiny Traveler largely ignored, four Disney apps and two Lillifee apps she played and a handful of favorite television shows.

Jigsaw puzzle apps are more portable than actual puzzles, and often free, so three of the above apps include puzzles.

From Disney and Lillifee she moved onto iMovie, a Nancy Drew mystery game app that taught some coding and GoldieBlox creative and maker apps.  I’m not crazy about the GoldieBlox toys but the apps are pretty good.

As she’s gotten older, graphic design and video-filming and editing apps have replaced the simple games and Disney shows. She’s created all kinds of movie shorts and trailers in the back seat for her own amusement.

Then there was Robot Factory and coding apps like Hopscotch, which now requires a monthly subscription. Train Yard and FarbenBlind are brainteaser games that she played for a while.

As a tween with her own phone it’s harder to keep her from spending most of the ride fiddling with it.

I still try to steer her toward coding, animation and video-editing apps and brain teaser games where I can.

I also recently bought a compact charger that fits four USB cords and plugs into the car’s cigaretter lighter. On road trips we often have all three phones plugged in at once, especially if we’re using one to navigate.

I still try to hold the screens in reserve because videos, games and coding apps run your battery down very fast. The cord doesn’t read the back seat while it’s charging. And I don’t want to find myself stuck in a traffic jam miles from home with a pent-up kid and no juice.

What do you pack for your car trips these days? And what have you learned to leave home?